Collection Connections: A Place for Everything & Everything in its Place 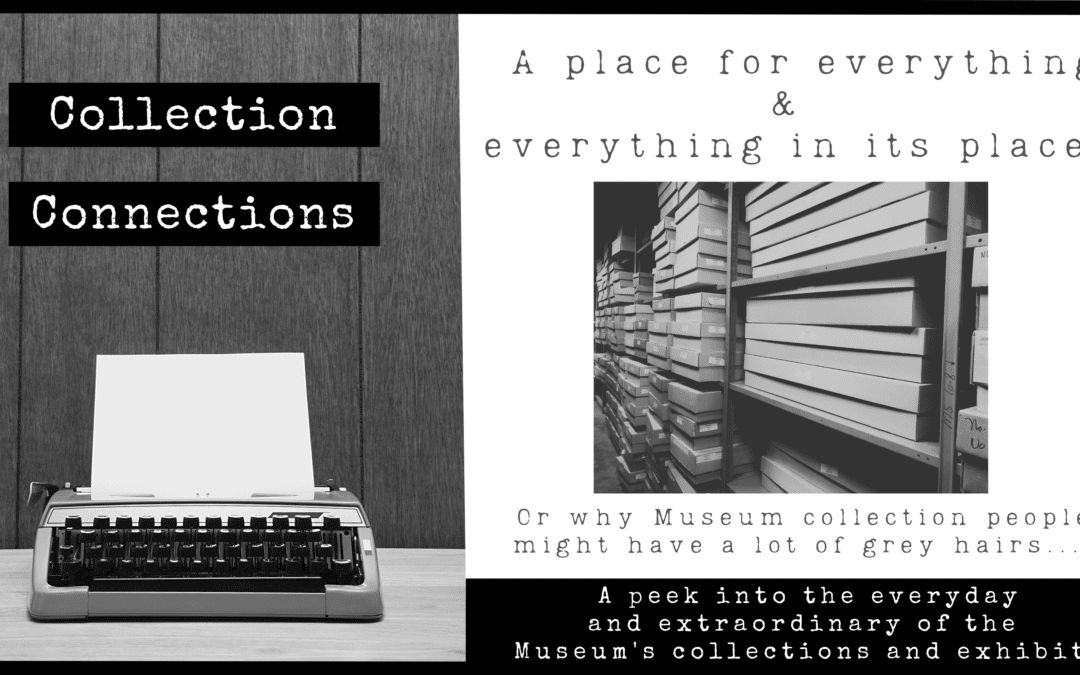 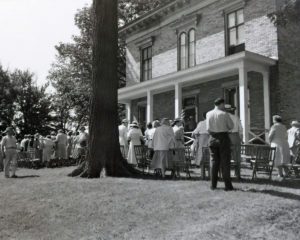 1954 Celebration of the Museum opening at the Taylor House

When the Sheboygan County Historical Society was chartered by the Wisconsin Department of State in 1923, local efforts were already underway to collect items of local historical significance. A sizable archeological collection had already been assembled and was held at the Library, waiting for a “suitable institution.” The local Daughters of the American Revolution chapter was also collecting historical materials. Beginning in 1933, those items and more were consolidated under the Historical Society’s collection, and eventually under one roof when Sheboygan County leased the David Taylor House to the Historical Society for use as a Museum.

With a single location for exhibits and objects, the collection of the Historical Society continued to grow. Furniture, clothing, home textiles, and military memorabilia, primarily from the past one-hundred years, were among some of the more common items donated in those years, while the addition of the Weinhold Log Cabin, Bodenstab Cheese Factory and Schuchardt Barn during the 1970s and 1980s also led to the addition of significant farming and dairy related implements. More recently, efforts to diversify the collection have added material culture objects related to recreation, politics, and non-pioneer settlers. Likewise, the collection has also added a number of contemporary items to the collection, as we strive to preserve not only the past, but also the present for future generations. 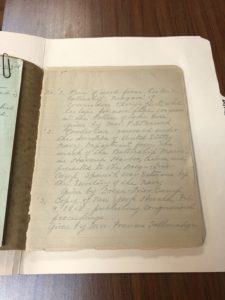 The original handwritten register of items donated to the DAR for a museum.

With over 100 years of collecting under our belt, the collection of the Historical Society is diverse in many ways. At approximately 35,000 objects, there are items dating from 10,000 B.C.E. to present, and ranging from little more than a square inch in size to 20 feet long by 10 feet wide. There are objects made completely of cast iron, while others are modern plastic. Not to mention the variety of fabrics, papers, and natural materials that objects are made of.

With all of these things to consider – the what, when, where, why, who – having a complete, consolidated inventory of the Museum collection has been a goal. It is also a crucial part of museum best practices as laid out by the American Alliance of Museums and the American Association of State and Local History. However, those thousands of objects were donated over a period of time where countless people have been charged with their care, documentation, and preservation.  Likewise, those best practices for how to document, label, and store objects have changed dramatically in the same time. 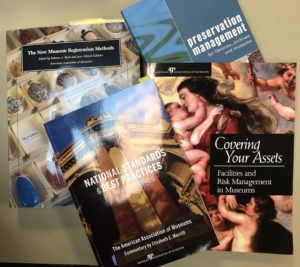 We knew completing a collection inventory would not be a small task, but a multi-year project requiring extensive planning and time. For several years now, preparations have been underway to lay the groundwork. The earliest steps began nearly ten years ago, as we moved artifacts not on display from a variety of locations to one of three designated collection storage areas. Not only does this make recording easier, the objects were all moved from areas that had limited environmental controls to spaces where we are able to control temperature and humidity (again – best practices). During that same time, rough information on overall object donations was entered into our collection database. Though limited in nature, this provided a basis for who and what had been donated that could actually be searched by computer.

We have also been fortunate over the last several years to have amazing interns who have helped us experiment with inventory work by tackling small pocket collections of items, for example all the quilts in the collection. Working on the pocket collections provided important information about what was the most valuable information to have in the database, the logical order to attack a group of items, and even what kind of challenges might await a larger project. 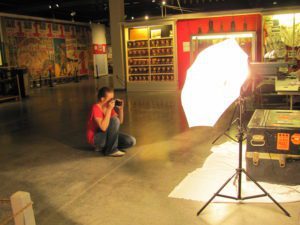 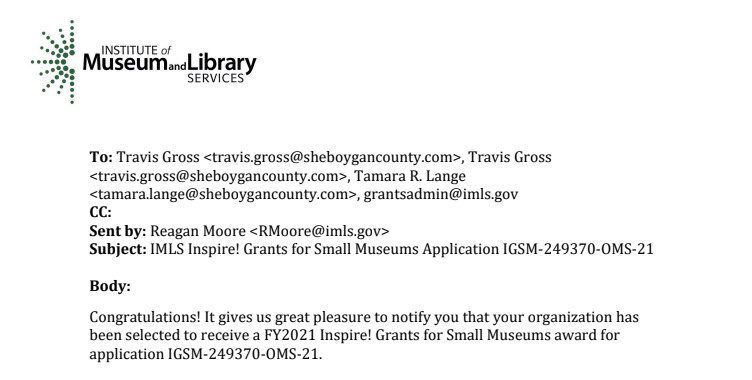 Email we received in August 2021 announcing the grant . Note there was never an actual paper letter. 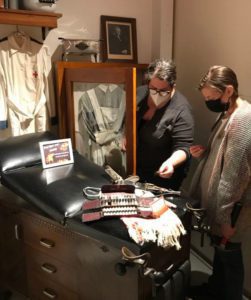 Curator Tamara Lange and Collections Assistant Rebecca Schnabel reassemble the medical office exhibit after all the objects were inventoried.

Perhaps the most important event on the road to a comprehensive inventory happened in August 2021. Nearly ten months after originally submitting an application, it was an exciting day when an email arrived announcing the Historical Society had been chosen as a recipient of an Inspire! Grant for Small Museums from the Institute for Museum and Library Services. The Inspire! Grants are part of the Museums for America competitive grant program. In 2021, the Historical Society was one of 208 awardees, from a total of 758 applications. The core of the grant enabled us to hire a dedicated LTE staff member to focus on inventory work. It was a fortunate coincidence that a recent intern, Rebecca Schnabel, happened to be in the market for a museum job.

The project has made incredible strides in a few short months. Becca’s familiarity with the organization, the overall collection, and the collection database allowed her to hit the ground running. The initial focus has been to inventory all objects on exhibit and we now have eleven of the twenty-two designated exhibit spaces inventoried. Some of the most recently completed exhibits needed little additional information recorded to have a “complete inventory record” as defined by the standards of the project. 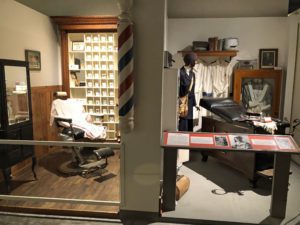 Both the Barber and Medical Office exhibits fell in the middle on the challenges scale.

As we have moved on to exhibits that have items donated many years ago, the challenges have slowly started to appear. Multiple objects with the same number, whatchamacallit mysteries, and the occasional hidden surprise have all provided moments of both laughter and a little despair. Take for example the case of the shears. While creating records for every item in the medical exhibit, we ran across an interesting piece of equipment. Certain that it was some kind of tool designed to cut, speculation amongst the staff ran wild. Was it for an umbilical cord? Could it be something to remove a wart or the like from a finger or toe? Why did it look like a cross between a bird beak, a vice-grip pliers, and a tongs? While the item had an individual number (well… kind of, but that is a story for another blog post), the donation paperwork said only “instrument satchel with some of its contents.” We knew which doctor it belonged to, but beyond that the only other note recorded years later called it a cutting instrument.

Original paperwork for the mystery object.

Thankfully, there are some great resources available out there! Object identification is definitely easier in the internet age and it also helps that Tamara has a small obsession with medical history (ask her about her graduate research project sometime if you are curious). Utilizing information available online from the Museum of Osteopathic Medicine and The Mütter Museum at The College of Physicians of Philadelphia, along with the reverse image search function of Google, we were able to narrow down that it is likely a Skene’s hawkbill shears. The context also fit, as many of the other instruments were related to obstetrics. A mystery even for the staff at first! 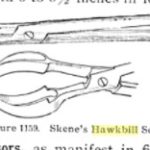 Sketch found in the The Mechanics of Surgery by Charles Truax, 1899.

There are puzzles that may remain forever, or at least until the inventory is much farther along. The maritime exhibit features a modified 48-star flag, which unfortunately had no number or identification physically associated with it. When an item is found with no number, the first step is to see if it can be reassociated with the original donation. There are numerous steps, including reviewing the information available in the computer database, but also looking through dozens of  index cards that were used for the first 80 years to record each individual object. Initially hopeful because the unusual shape of the flag would make it easier to identify, we soon found that of the seven 48-star flags recorded, only two had any details about size. For the time, the flag has been recorded as a “Found in Collection” object… perhaps in a few years we can do some comparisons after they are all accounted for in the database. 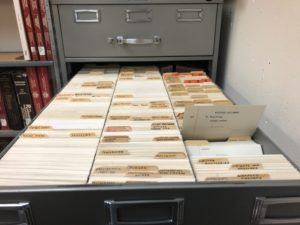 One of two file drawers of individual object index cards.

Interestingly, while the collection itself is one of the most visible aspects of the Historical Society, the work that goes on to maintain it definitely is not. It is work that most often is happening in storage, in an office, or in the workshop. But many people find it fascinating, and we love sharing our “behind the scenes” work.  As part of the project, we are hosting a number of Behind the Scenes work days where you can get up close and personal with the staff as we work on this big project. Our first one is scheduled for February 17th, when staff will begin tackling the objects in the baseball exhibit. Feel free to stop by anytime between 10 am and 3 pm to chat! 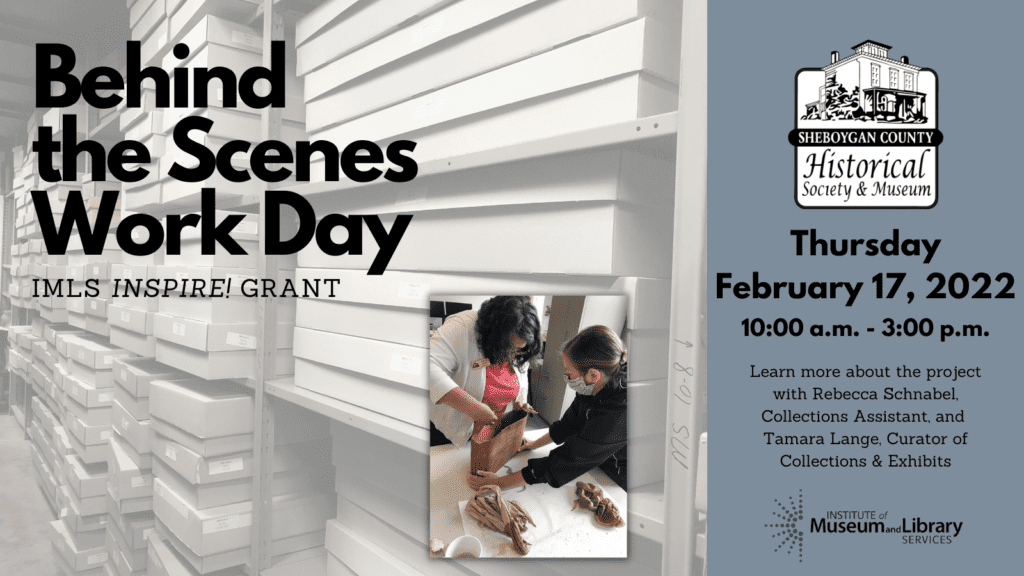 The Institute of Museum and Library Services is the primary source of federal support for the nation’s libraries and museums. We advance, support, and empower America’s museums, libraries, and related organizations through grantmaking, research, and policy development. Our vision is a nation where museums and libraries work together to transform the lives of individuals and communities. To learn more, visit www.imls.gov and follow us on Facebook and Twitter.