Collection Connections – How Collection Work is Kind of Like Chili 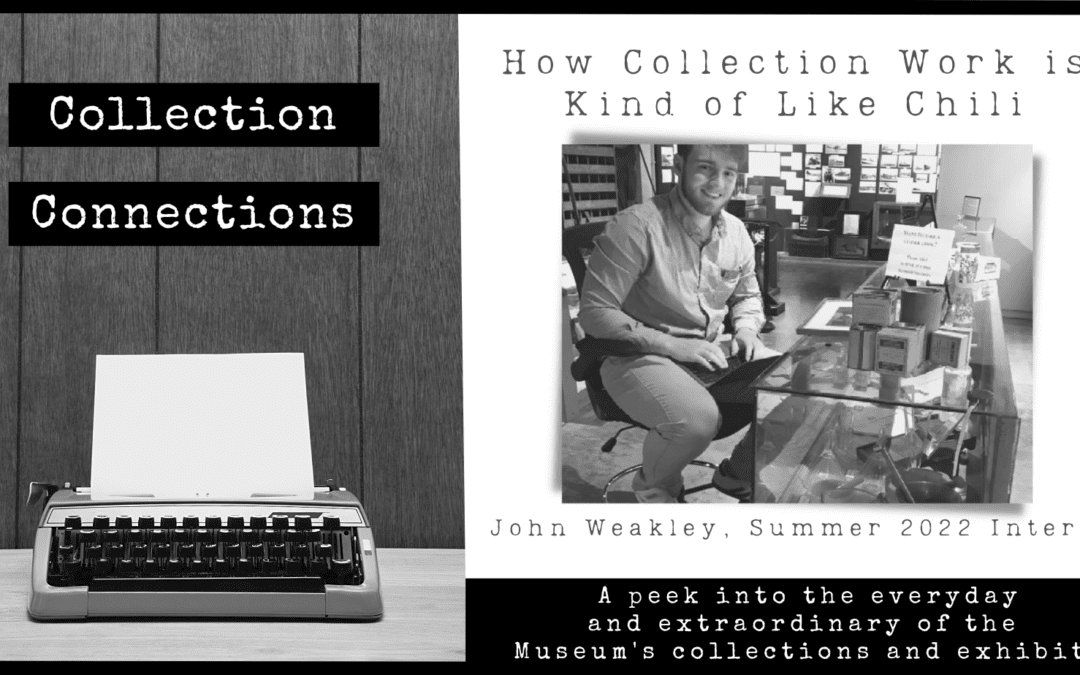 Many thanks to our John Weakley, one of our Summer 2022 Interns, for sharing a few thoughts on his experience! We agree John — a lot of things can be compared to chili. 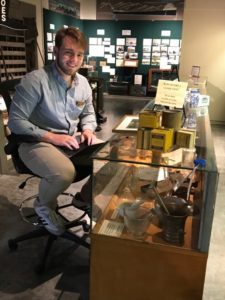 Perched in the Pharmacy Exhibit — for three long weeks.

Honing the skills that are required in the curatorial field is essential to any museum professional. This, however, was not a goal of mine until quite recently. In fact, I am not sure if it is at this point in time. What I can say with clarity, however, is that my time working alongside the staff in Sheboygan is one I will not soon forget. For if not a love of the craft, I have gained an appreciation for history and the preservation of our past has risen to the surface.

Like a pot of chili, our time is not lasting. Rather, it’s best to enjoy and savor each spoonful as it is still warm and the steam rises, right? Well, to me the consumption is not what makes the chili enjoyable. Creating the chili itself, adding each ingredient in the exact dose needed to fulfill the recipes request, is the time to savor. This is when the “love” is added right? When your mother or father made supper and served it ”with love,” it had to be added at some point. And who truly got the better end of the deal, your childish hunger being fulfilled, or the chef watching your smile emerge as the chili disappeared. To enjoy the craft and create an experience from which others derive joy is what I define as a dream occupation. This is what I seek from life; a way to spend my days without such egotistical influence, instead working towards enhancing the days of others. Working at a museum, I was able to experience first hand that I have found a way to fulfill my dream. Whether it will be the path I choose or not, I would have never found out without the community of Sheboygan, the guidance of my peers, and without the County Museum. 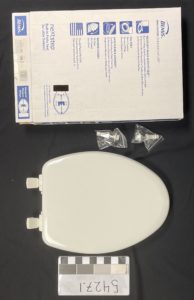 The first object to catalog — a toilet seat — really!

I will never forget the first item I was tasked with cataloging during the initial week of my arrival; an object so grand it was left to lucky ol’ me: a toilet seat. Ah, but you see this is not any old toilet seat, don’t be too quick to judge. This toilet seat came rigged with a smaller training seat which allowed for those younger to use it as well without fear of falling in. What is also important to note about this seat is its manufacturer, Bemis. Of course, an area known for having a world class bathroom fixture company would logically have a world class toilet seat manufacturer. To answer how early on this natural combination occurred, let’s jump back in time to 1901, when the company that is known as Bemis today was created. Wooden coaster wagons were the top priority at the factory. In fact, many wooden products have come from within the company walls. Oh, and it was called White Wagon Works, Inc. Now if you think that name is a bit of a mouthful I would have to agree; Bemis just has a nicer sound and fluidity to it, no awkward pause is necessary to catch your breath in the middle of saying it. But anyway, it was not until Albert Bemis and his partner bought up the majority of shares in the company during the 1920s that the marketing arm name – Bemis Manufacturing – was first introduced to the world. The end of another company due to the Great Depression provided an opportunity for Bemis to transition to an increasingly needed household product. And it is for this reason I have laid out above that I find the work museums do to be vital to public learning and engagement within the community. A toilet seat is never just a toilet seat.

Adventure lurks around every corner at the Museum. Or at least the project helps give off some extra heat on a particularly chilly summer evening!

With every worthy experience comes hardship and challenges. The toughest project we worked on over the summer was easily the inventory check for the Pharmacy exhibit. This exhibit contains over 600 individual objects, some rather large and others containing multiple separate pieces. One of the more challenging aspects I faced, however, was the repetitiveness of the assignment. I tend to be a very adventurous personality that seeks out new challenges, sometimes before I have fully completed the one at hand. This project pushed me to overcome this restraint I often place on myself. I slowed down my pace and began to enjoy the process rather than try to expedite it. What I quickly began to realize as we progressed through the exhibit with this updated outlook is that pharmacies of the early to mid 20th century loved their laxatives. Chocolate covered, travel size, extra flavor, etc., these diuretic treats became the new craze; no wonder the U.S. had to standardize plumbing codes during this period. So, while this project was in my eyes the toughest for the reasons I have described, it was also easily the most rewarding. Finishing the final objects felt like scoring the winning goal in the World Cup… maybe that’s a stretch, but I was really excited. I had been working in this same exact niche of the museum along with Elaina, my fellow intern, for over three weeks. 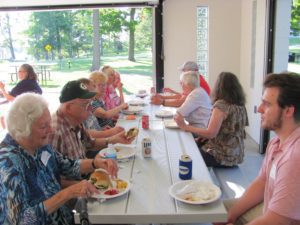 Learning the definition of an Oostburger at the Volunteer Appreciation Picnic.

So, like the summer, as this message nears its end I wish only to give thanks. I can never repay the people of Sheboygan or the museum staff for the experience I was granted and for the knowledge I was offered. As I have mentioned before, while I am unsure of my future and what it may hold, both in regards to location and occupation, I can leave this town with a greater appreciation for its history and people who keep it alive. I hope to take this perspective with me as I figure out what it is I truly want to do. Thank you.