Collection Connections – Bringing in the Crates 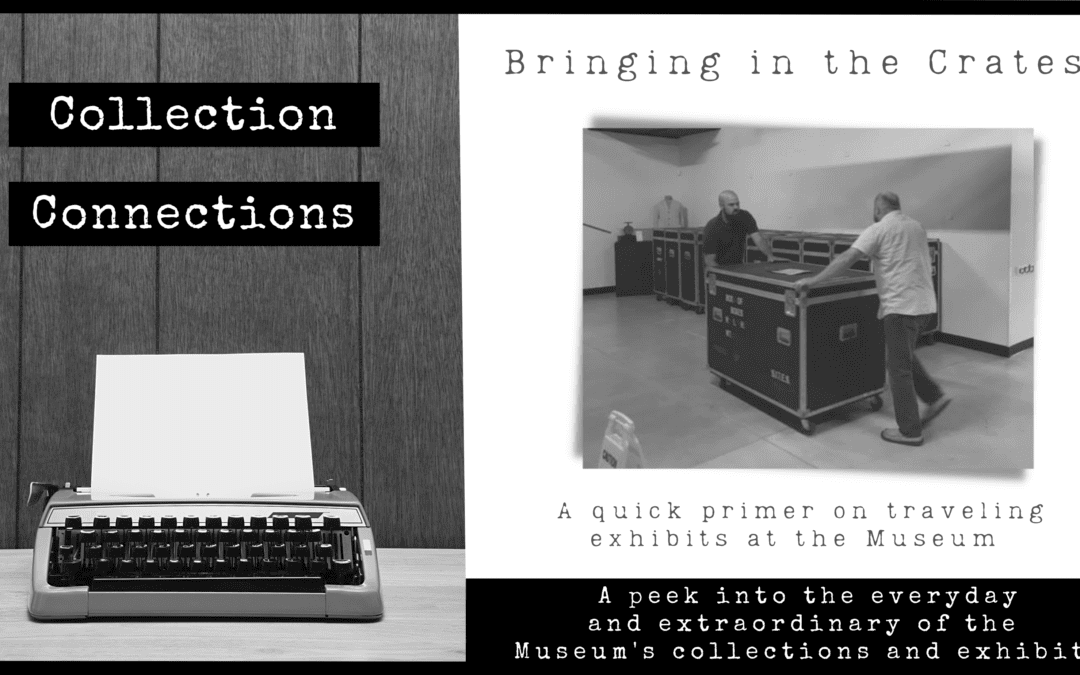 Over the last several years, the Museum has been fortunate to host a variety of traveling exhibits, especially early in the calendar year. There are a multitude of reasons for any museum to do this – creating connections to historical topics, highlighting a subject the host institution may not have an extensive collection to support, or offering something novel. Even, *gasp*, to give staff a breather between exhibitions. These exhibitions come from other cultural organizations and museums, along with companies that specialize in creating and traveling exhibits.

The process of hosting a traveling exhibition begins long before the exhibition is actually onsite. Most of the exhibits we have hosted were booked at least two to three years in advance. In fact, before we can even officially book an exhibition, there is an approval process that assesses a variety of aspects of our organization. Each exhibition developer has set standards that must be met and many offer a variety of options depending on factors like staffing, building construction and exhibition space, environment, loan history, and security. Luckily, we can typically provide a completed copy of the American Association of Museums General Facility Report. The thirty-three page report, along with floor plans and photographs, is a standard starting point for both lenders and borrowers. The bonus is that once developed, these materials are easily updated with current information. 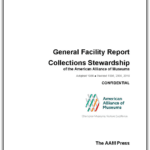 Once the approvals are set and the contracts signed, there is typically a breather period where we start some of the prep work for the exhibit. During this time, we might start looking at the local connections to incorporate into the exhibition. For example, when we hosted Work, Fight, Give: American Relief Posters of World War II, we were able to include a Sheboygan County branded Bundles for Britain poster. It is also a great time to brainstorm potential programming to accompany the exhibit. 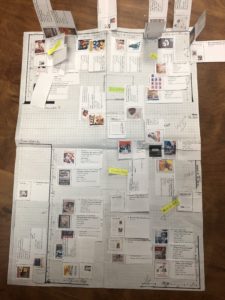 At the same time, we are developing a rough layout for the exhibit to ensure that there is adequate space for both the traveling exhibit objects and any additional content we hope to include. Keep in mind ninety-nine percent of the time, we are creating these plans from object lists with basic dimensions and thumbnail photographs. While it is possible to use a computer program to develop the plan, in many cases it is easiest to go old school with graph paper and the cut-and-paste method. Over the years, we’ve had to build temporary walls and borrow exhibit cases to have a place for everything. Of course, this is also the time where the fun ideas, like building a swing to include as a “hands-on” for an exhibit, also develop. This can also impact upcoming budget allocations above and beyond accounting for the exhibition rental fee.  (Oh – did we forget to mention that?  Almost every exhibit has some kind of a rental fee and the range can be SUBSTANTIAL, even for exhibits of similar size and content.) 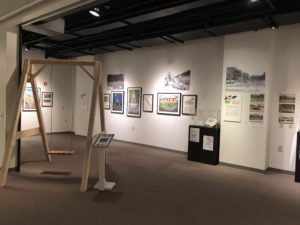 This was the SECOND swing we built for an exhibit!

As the arrival of a traveling exhibition draws near, the pace of preparation picks up significantly. Much like an exhibit that we develop in-house, the logistics of moving the objects from one space to another starts before an exhibit opens. However, it is not unusual for traveling exhibitions to cover thousands of miles between venues – sometimes flying a portion of the trip, other times traveling via road the entire distance. Nearly all traveling exhibitions we have hosted have an arrival time frame – usually about a week in length with a “Must arrive no later than” date. That final arrival date is often a moving target until twenty-four hours prior to arrival… and sometimes that is a bit generous. 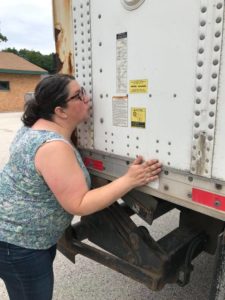 Sometimes things just don’t go as planned… so when the truck finally arrives just four days before the exhibit is supposed to open, you just go with it.

It also seems almost inevitable that there will be some kind of crazy weather phenomenon when the final day is settled on. The Nostalgia Awakens arrived on the absolute coldest day in nearly 20 years (seriously – high temperatures were in the negative 20s) and shipping for The Way We Worked had to contend with severe weather and flooding on the way to the next destination. The last year has been particularly challenging as the global difficulties in the supply chain and shipping have ripple effects. We actually were arranging outgoing shipping of Work, Fight, Give before it even arrived here. 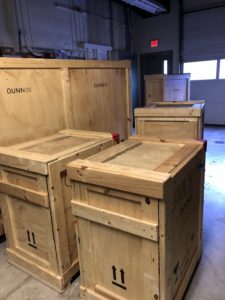 The crates have arrived.

Once an exhibition actually arrives at the Museum, the process looks very similar to when we are installing an exhibit of our own objects. The items are staged in a section of the gallery, which allows time to adjust to any environmental changes. While this is particularly important for traveling exhibitions, it is really good practice for everything as every space has a little different environment.

There are some differences though. For traveling exhibitions, the amount of time spent on condition reporting the objects is typically greater. For objects in the Museum collection, the condition reports often already exist and simply need a brief update, or the process can be done ahead of time. Another advantage is that we are already familiar with most of these objects. For a traveling exhibit, it is almost like starting from scratch for each item even though most have a condition log book that is updated at every venue. This important step protects not only the Museum, but also the objects as they travel. The sooner damage is detected, the easier it is to make repairs, even if it means we might not have an object for a portion of the exhibit (see “plan tweaking” above). 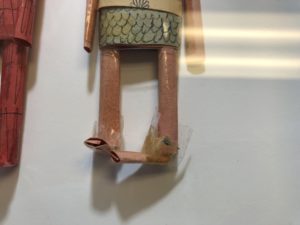 Providing ongoing care and documentation for objects is an important part of traveling exhibitions.

With everything gathered and accounted for, installation commences. Larger items are placed first, along with artifacts and images that would be difficult to reach as more pieces are installed (Hey walls! I’m looking at you!). No matter where the exhibit originates, there is always tweaking that occurs from the original plan. With any exhibit, there is always a point that lands somewhere between “a tornado tore through the gallery” and “where did I put the darn (made PG for blog purposes) [insert any tool name here].” Luckily, years of experience have taught us this is the turning point when everything starts to come together. We do occasionally get a little punchy though.

Curious to dig deeper behind the scenes of traveling exhibitions or even just some of our favorite “I can’t make this up!” stories? Join us on Thursday, May 5, 2022 for a special Cocktails with the Curators program! Not only will staff from our Museum be sharing more about what it takes to bring in a traveling exhibition and get it ready for the public, we will also be VIRTUALLY hosting Robin Hill, Exhibit Designer, and Steve Furnett, Exhibitions and Collections Manager, to share what it was like to create an exhibit with comic book great Alex Ross, which first debuted at the Bess Bower Dunn Museum of Lake County before becoming a national traveling exhibition. 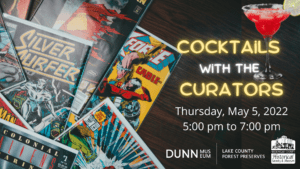 This special program is part of the traveling exhibit Marvelocity: The Art of Alex Ross on display at the Sheboygan County Historical Society and Museum through June 25, 2022. The exhibit and this program are included with regular museum admission – $9 Adults, $7 Seniors (62+), $7 – Active Military, $5 Youth (6-17), Free – Children 0-5, Free – Museum Members.