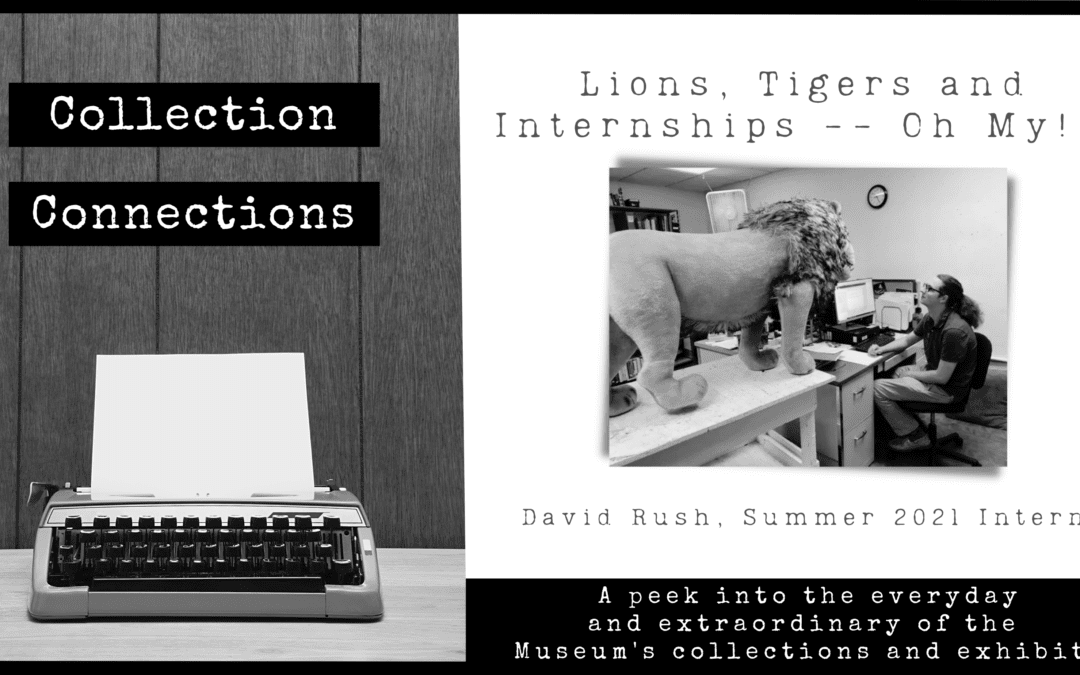 We are kicking off a new monthly blog at the Museum for 2022! Collection Connections will bring you behind the scenes into some of the important, fascinating and occasionally frustrating work that keeps the collection, exhibitions, and more moving forward at the Museum.  Our first feature is from one of our Summer 2021 Interns – David Rush.  Watch for additional blogs from our other Sumer 2021 Interns Nick Eggert and Roman Lulloff in the months to come. 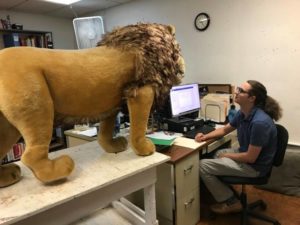 David and the Prange’s Lion face off during cataloging.

My summer at the Sheboygan County Historical Society and Museum was a memorable one. Starting my Museum Studies MA degree at the Cooperstown Graduate Program in upstate New York mid-pandemic, I had few options for hands-on work during my first year in the field. I applied to the Sheboygan County Historical Society and Museum looking to immerse myself fully in the workings of a museum, and boy did I get that. Interning under Curator Tamara Lange, I had the chance to explore nearly every aspect of working in a museum, from exhibit creation to hosting events. The largest project I worked on over the summer was adapting the travelling Smithsonian exhibit, The Way We Worked, for display in the museum. As a non-native, I started with next to no knowledge of local industry and work culture in Sheboygan County. Thankfully, there is no better place to learn about the history of the county than the museum. All the staff were incredibly knowledgeable, and helpful in bringing me up to speed. 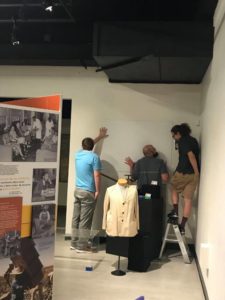 Alongside fellow intern Roman, I sifted through over a century’s worth of photos to bring some local flavor into the exhibit. We aimed to incorporate images of a range of jobs, from manufacturing to farming to the service industry, highlighting the diversity of work and workers in Sheboygan County. After a couple weeks gathering images, we had amassed a stockpile of well over a hundred possibilities for the exhibit. Then came the more difficult job of culling our findings, cutting them down to only around 35 images, the maximum amount the exhibit would accommodate. Our criteria for doing so primarily depended on three factors: An image’s visual quality, its relevance to the exhibit, and its redundancy with other images in the exhibit. While this enabled us to sort through the photographs, it did result in leaving some fantastic images out for one reason or another, and was altogether a difficult, but essential, process. 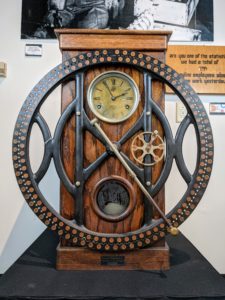 Not only did we add photographs into the exhibit, but Roman and I also went through the collection and found some objects relevant to The Way We Worked that we could put out on display. Like we did with the photos, we used the objects to represent a variety of occupations present in the county. One of my favorite objects I got to work with was a 1917 Dey Time Recorder, a precursor to punch clocks. Initially we only knew it had come from a local casket company, but after some digging I was able to trace its origin back to a toy company that worked out of the same building before the casket company moved in. Researching the clock was a lot of fun, and I had a chance to share some of my findings in the August Collections Spotlight on the museum’s Facebook page. 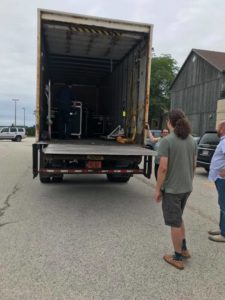 Once we prepared the images and artifacts from our collection, the next was setting up the portions of the exhibit sent from the Smithsonian. After a lesson in flexibility, the shipment from the Smithsonian arrived and we set to work examining the pieces. This was by far the most tedious part of the setup. We spent the better part of a week documenting every crack, smudge, and scratch on the parts we received before finally putting up the full exhibit. 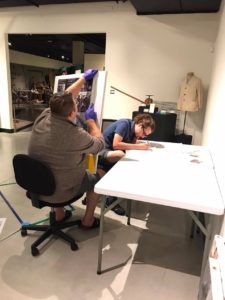 As well as setting up The Way We Worked, I had plenty of other projects to work on. During the pandemic, a substantial backlog of items in need of cataloging into the collection built up at the museum. One of my main tasks involved describing, condition reporting, photographing, and storing many of these. Some objects, such as a series of drafting triangles, were relatively simple and quick to catalog. Others, like a partial milk bottling machine, proved far more time consuming. Each object brought a new and exciting challenge. Tamara and Nathan were invaluable aids when I found myself stumped cataloging. After working with such a diverse collection at the museum, I now feel prepared to take on any sort of cataloging challenge thrown at me. 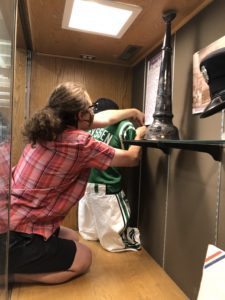 Coming from the East Coast, Sheboygan was a very different place for me. I had never even tried a cheese curd before arriving here, but the welcoming nature of the Museum’s staff, volunteers, and community, helped me feel right at home. My time interning at the SCHSM has proved incredibly valuable, and the lessons I learned here have shaped me as both a museum professional and a person. Thank you so much to everyone that made this such a special summer.